Sherburn in Elmet Community Trust are delighted to announce the organisations that have been successful in their Covid recovery applications.

These awards are from un-spent money secured for the Covid response and is intended to help charities and groups in Sherburn in Elmet and surrounding villages get up and running again, with additional support provided by Selby District Council.

Read more about the grants and the eligibility criteria in our March 2021 news story.

Funding to help provide equipment and resources to support the young people and 30 volunteers undertaking activities outside in all weathers.
https://sherburninelmet-scouts.org.uk/ https://www.facebook.com/sherburnscout

Funding to enable regular visits from their Advice Bus which is ‘staffed’ by fully trained volunteers able to offer advice, information, and support to help people overcome the problems they face and build the skills they need. https://citizensadvicehrs.org.uk/ https://www.facebook.com/CitizensAdviceMidNorthYorkshire/
Phone: 0800 278 7900

Funding to help reopen the Gym safely and to provide free sessions of classes which will target new groups and help improve physical and mental health.
https://sherburngymnastics.co.uk/
https://www.facebook.com/sherburngc
Telephone: 07866 315157

Purchase of a Zoom subscription and a webcam to enable Club meetings to continue during lockdown, and to allow those members not confident about attending physical meetings (when they resume), to continue to attend virtually.
https://sherburn-camera-club.co.uk/ https://www.facebook.com/sherburn.camera.club

To fund venue hire in Sherburn in Elmet for 6 monthly sessions from June to December to allow up to 12 people at a time to get together to reduce social isolation, build confidence to participate in community life, support each other, and make items for worthy causes.
www.tadcrafters.org.uk
https://www.facebook.com/tadcrafters/
Email: tadcrafters@outlook.com

Today (23 March 2021) marks a year since the first lockdown in the UK; a year which has brought loss and great difficulty for many people.

It has also been a year when residents responded to the challenge. Even before the first lockdown started, residents were asking what they could do to help. That wave of support was essential in the fight against Covid.

Sherburn in Elmet Community Trust helped to set up Sherburn Coronavirus Aid Group (SCAG) and on the 21st and 22nd March 2020 volunteers from Sherburn White Rose Football Club leafleted every house in Sherburn in Elmet explaining that support was available.

But that support was only possible if there were enough volunteers who were willing to help. Fortunately Sherburn residents responded.

Mick Hawes is the volunteer manager for SCAG and he said the support offered by volunteers had been essential in the battle against coronavirus – “Without our volunteers we wouldn’t have been able to do anything. They visited people, helped with shopping, prescriptions and other essential supplies and provided information.”

It has been a difficult year, but hopefully we can be cautiously optimistic about emerging from lockdown, and we can certainly be proud of the way our community has responded to this pandemic.

Would you like to make a real impact in your local community? Sherburn in Elmet Community Trust are looking to recruit two volunteer trustees to strengthen our existing team.

What are we looking for?

We are looking to recruit two volunteer trustees to strengthen our existing team.

This means attending monthly trustee meetings, contributing to the strategic direction of the organisation, ensuring we are carrying out our charitable objectives and managing our resources, and supporting our small team of staff and volunteers. Our website can be viewed at sherburninelmetcommunitytrust.co.uk.

What difference will you make?

We were formed in 2016 and have been successfully managing two important local facilities as well as developing community resilience during Covid 19. You can play a part in continuing that success.

What’s in it for you?

Becoming a trustee is both a rewarding way to help your community and a way to learn fantastic new skills. It’s an invigorating and dynamic role, which puts you at the very heart of a charity and its work, liaising with a team of like-minded people.

Please email info@siect.uk with brief details of yourself and we will get in touch.

Offering financial assistance to local volunteer groups who are recovering from the Covid-19 crisis.

During the Covid-19 crisis Sherburn in Elmet Community Trust have been the responsible body overseeing work done by Sherburn Coronavirus Aid Group and Sherburn Community Support Organisation to support our community.

Essential financial support has been provided by North Yorkshire County Council and Selby District Council, but we have been fortunate to receive donations from individuals and firms who recognised the importance of the work which was being done.

With the government setting out a roadmap for the easing of restrictions, we hope that 2021 will mark a strong recovery from this crisis. To help with that recovery we are using the remaining money donated to us to create a fund for community groups and organisations.

Applications for funding are welcome – please email info@siect.uk and we will send you a grant application form. Applications are limited to a maximum of £1000, but we want to help as many groups as possible, so smaller applications are encouraged. All applications must be submitted by 31st March 2021 and you will be notified of the outcome by Friday 16th April.

What expenditure is eligible?

Costs associated with recovering from the Covid-19 crisis. Reasonable items are likely to be:

This list is not exhaustive, if you feel that you have a great idea and are not sure if it may be eligible for funding, please e-mail info@siect.uk for advice.

What is not eligible?

Sherburn in Elmet Community Trust are hugely grateful for the wonderful work done by the many residents who volunteered to help during this crisis. Without their help the response would have been much less effective. We are also very grateful to all the individuals who donated to us, there are too many to list, but every one is appreciated.

A video organised by us at Sherburn in Elmet Community Trust and Sherburn Coronavirus Aid Group, funded by Selby District Council, has been produced to showcase the amazing work which has taken place over the last few months. This video shows the vital work that over 100 volunteers put into helping the community during the Covid-19 crisis.

Help for the residents of Sherburn in Elmet during the peak of the crisis included shopping, book loans, delivery of prescriptions, befriending and more. The group were also responisble for errecting the flags and banners around the village to say thank you the the NHS and keyworkers.

As the legal requirements relating to Coronavirus are being eased, the Library Management Group want both our volunteers and visitors to feel safe and comfortable at the library.

Face coverings are now not legally required however we encourage visitors and volunteers to wear them if social distance can’t be maintained.

We will no longer be asking visitors to sanitise their hands and use the track and trace system when they arrive at the library. We will however be leaving the hand sanitisers in place with appropriate signage.

We will not be operating a one way system or applying a limit on numbers of people in the library although posters advising social distancing will remain in place.

The toilet can be used by the public but we continue to ask users to wipe down surfaces they have touched.

All of the public computers will be available for use but we will continue to ask users to wipe down the table, keyboard and mouse.

The drinks vending machine is back in use.

Group activities and events have restarted but the Management Group will consider each of them individually and apply conditions if necessary. Check the groups page for updates, see announcements us on Facebook or ask in the library.

See our contact page for ways to get in touch and how to find us. See our opening times.

Support Sherburn in Elmet Community Trust by starting your shopping at smile.amazon.co.uk 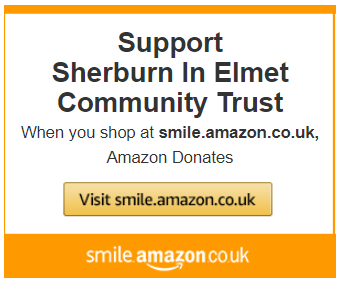 Other retailers also give a small commission when you start shopping on the easyfundraising website – see this page for more details and how to support us – again, no cost, no catch to you but donations for us!

A prize draw was launched on 1st September 2019 to raise funds for the Old Girls’ School Community Centre. Tickets were £1 each and the prizes were: 1st Prize £300; 2nd Prize £200; 3rd Prize £100. Terms and conditions are shown at the end of this page.

Due to Covid, we were unable to run the draw every month as planned. Our final draw took place in December 2021.

This draw took place at our Christmas Fair on 11th December. The winning tickets are:

This draw was due on Saturday 28th March but didn’t go ahead. We offered refunds to those who wanted them. Any remaining tickets from March were entered into December 2021.

There was no draw in January 2020. Any ticket sales during January were included in February 2020.

Every home in Sherburn should have received a copy in early 2019. A supply was also given to house builders ready for residents moving into their new home.

This is only available in paper copy. Further copies are available free of charge from:

The Old Girls’ School Community Centre & Tearoom will be celebrating the first year of opening with a garden party on 1st September 2019, from 12pm-4pm. Everyone is welcome.

There will be traditional games, raffle, cream teas and lots more.