The Old Girls’ School has been transformed into a vibrant community building offering meeting rooms, events & classes, a community cinema and a tearoom. Visit www.oldgirlsschool.co.uk to find out more.

The school was built in 1876 and provided an education for girls and infant boys until it closed 100 years later in 1976. The building was then used by North Yorkshire County Council offices until they vacated in 2017, leaving a risk it would be left unloved and deteriorate or, worse, be demolished. 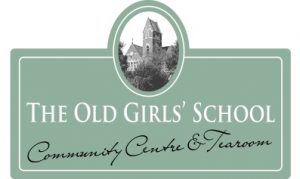 The Friends of the Old Girls’ School was formed by a group of concerned residents to prevent this beautiful historic building from progressively getting in a worse state of repair due to being unused and to explore the possibility of bringing it into community use.

The Friends group continued to pursue these aims within the governance of Sherburn in Elmet Community Trust (SIECT). Four of the Friends group – Andrew Potts, Tony Hewitt, Alma Hodgson and Gary Limbert – became Trustees of SIECT.

North Yorkshire County Council granted a lease to Sherburn in Elmet Community Trust from April 2017. The building needed considerable work to bring it back into use. Some grant funding was obtained to revamp the garden area to the front of the building and to carry out some repairs to the roof and bring the toilets back into use during 2017. 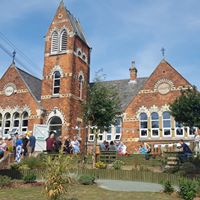 The Trust was awarded National Lottery Funding for both the renovation work and the running cost for the first 3 years. Further funding has also come from a number of other grant awards and several kind donors  for the renovation work.

The vision is to use the building in a flexible way to provide a multiple use facility for the Community. After the first 3 years, usage will have to generate sufficient income to provide for the management, upkeep and maintenance of the building.

Contractors for the main renovation work were appointed for start to be made in March 2018 and the work was substantially completed at the end of June. A considerable amount of painting and decorating was done by volunteers over the summer with a grand opening on the weekend of 1/2 September 2018.

Further details at www.oldgirlsschool.co.uk including an events calendar, details of the community cinema, and room hire available.  Find us on Facebook, yell.com, Yelp and TripAdvisor.

For details of the tearoom inside the Old Girls School, see thelittleteapottearoom.co.uk.